A Rogue Cultist Is Preparing For Battle In Messara

From here, you can track your targets as you gather the info needed to unmask their true identity. This isn’t always straightforward to do, so here are some tips on how and where to find more Cultists in Assassin’s Creed Odyssey. 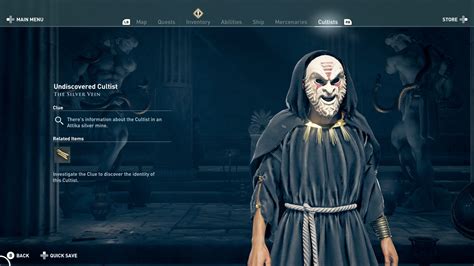 She’s found in the northeast of the Bay of Xerxes at the Wild Bear location You don’t need to finish the battle to claim his legendary item and cross him off the list.

To find Sot era, travel to the Port of Isaiah on the Southeast side of Regards on the water's edge. Clue: A Pole march in Attica knows the cultist, or continue on your Odyssey Clue Pickup : Obtain the Letter to the Master by completing the Pericles Symposium Main QuestHermippos can be uncovered in two ways.

One of which includes taking out an elite captain, a Pole march, at Fort Pyle in northern Attica. The Pole march is the captain with the biggest icon, and taking this enemy out in a fort can be a tough challenge.

Epictetus the Forthcoming is the first cultist in The Silver Vein, but is killed during a story event in The Serpent's Lair main quest, and is therefore not a target. Clue: The Chimera is heading an expedition to Andres Clue Pickup: Obtain the Cultist Letters in The Serpent's Lair main question revealed, you can find The Chimera on the island region of Andres in Ste ropes Bay.

She is located on the southern tip of the island at a Beach Encampment, just south of the Forge where you travel to shortly after completing The Serpent's Lair. While the cultist is not here, you can search the largest cave chamber for an upper ledge on the left where a large chest holds the clue you need.

Pokemon the Wise if the Sage of the Silver Vein, and can only be revealed once all other cultists in this group have been eliminated. Prison is the first cultist from the Delian League, and can only be uncovered by completing the main story.

Clue Pickup: Obtain the Cultist Letters in The Serpent's Lair main question reveal the identity of this cultist, you must reach Attica and continue the main quest until Pericles tasks you with helping several of his friends. Complete the main quest Escape from Athens to help Phidias get from the port to the island region of Serifs to get the clue you need.

You can usually find him in his quarters on the North side of the quarry under an overhang near an Animate Strata document. Parks the Cruel is the second cultist from the Delian League, and can be exposed by engaging in a side quest.

Help people nearby Clue Pickup: Eliminate Prison on the Isle of Salamis In order to expose this cultist, travel to the island of Demos and engage in the side quest Rebel, until you are able to take part in a Nation Battle, and then you can expose and kill him. Therefor the Hand is the third cultist from the Delian League, and can be uncovered by continuing the Main Quest line.

Once you reach the story point to uncover Therefor, you will find him in Athens, in the region of Attica. Io bates the Stoic is the fourth cultist from the Delian League, and can be revealed by killing Parks as well as high level mercenaries.

Odors the Bull is the fifth cultist from the Delian League, and can be revealed by killing Tito's of Athens in The Arena. Once revealed, you can find Odors at the Leader's House in the city of Hygiene, in the region of Lesbos in the far Northeast of the map of Greece.

Clue Pickup: Obtain the Cultist Letters in The Serpent's Lair main question order to uncover the identity of this cultist, you must journey to the Xerxes Military Fort just outside the town of Opus in the Loris region, and loot the Nation Treasure Chest. The fort is a big area, but a central structure hides the Nation Chest and has a hole in the wall you can slip into for stealing.

Once revealed, you can find Skylab the Fair in control of the region of Europa to the East of Loris. He can be first found in the Leader's House in Chalks City, but is surrounded by high level captains.

If you want a sneakier approach, begin killing the soldiers on the island, and burning war supplies at the Chalks Farm, Oreos Quarry, and Cysts Fort to make the leader vulnerable. After this, Skylab will drop in level, and take to the streets of Chalks to try and raise morale, leaving him isolated.

The Monger is the second cultist of the Peloponnesian League, and his location is only revealed by following the main story. Depending on which action you take, you'll be able to convince another cultist to back down if you killed The Monger out of view of the public.

Pianos of Parts is the third cultist of the Peloponnesian League, and cannot be uncovered except by the main story. Once uncovered, you can find Allies patrolling the region of Eli's, walking between Fort Doritos and the main city, as well as the road between them.

The clue will point to his location in Fort Saigon, in the region of Arcadia, which will be revealed during the main story. Clue Pickup: Obtain the Cultist Letters in The Serpent's Lair main questioner revealing his identity, you can find Aster ion sailing his personal elite ship around the island of Andres to the East of Attica.

Once Solos is killed, you can find The Octopus sailing between the islands of There and Ana phi. Melancholy is the fourth cultist of the Gods of the Aegean Sea, and his clue can be obtained by killing The Octopus.

You can also expose him by looting the underwater Palace of Amphitrite, northeast of There Island. The Hydra is the Sage who leads the Gods of the Aegean Sea, and can only be exposed by eliminating all the cultists of this group.

Once exposed, The Hydra can be found circling the waters in the far Southwest of the island of Yessenia. Noise is the first cultist of the Worshipers of the Bloodline, and can be uncovered after completing The Serpent's lair quest.

Clue 1 Pickup: Obtain the Cultist Letters in The Serpent's Lair main question uncovered, you can fin Noise at Wild Bear caves in the top center of the Mali's region. You can often find her outside the cave, while the bears may stay inside, letting you eliminate her first without worrying about additional threats.

Clue 1: Onto the Great is stationed in a temple in Cape So union Clue 1 Pickup: Obtain the Cultist Letters from The Serpent's Lair Question uncovered, you can find Onto at the Temple of Poseidon at the Sanctuary of So union in Lower Attica just South of Athens. Below the Beast of Sparta is the third cultist in the Heroes of the Cult, and can only be found in the Arena.

To uncover this cultist, defeat Onto the Great, at which point you will learn that Bacteria is involved in the conquest of Boeotia. Once uncovered, you can either find her roaming the region of Boeotia, or at the Cave of the Oracle if you choose to engage in her quest.

Enemies the Legend is the Sage of the Heroes of the Cult, and is also the number one mercenary in all of Greece. Because of this, you can either uncover him while traversing the world at large, or pinpoint his location by defeating all the cultists in this group.

Since all mercenaries will travel Greece and appear at random locations, you may or may not find him before you uncover his identity as the cult sage. The Ghost of Cosmos is the faceless and enigmatic leader of the cult, even above Deimos, who leads from the shadows.