I personally like the Andalusian much more because they carry themselves much easier than a Frisian. I also love how hyper and kinda nervous they are, not sure why but I bond a lot more with sensitive horses. 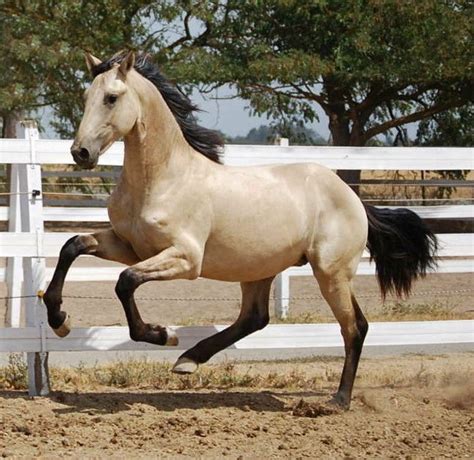 If were talking about what would dream to have Andalusian . Fully. Silver/ dappled gray, but realistically what we will have is a Frisian . I owe my wife one. And when money is right I am to make good on that promise. In the next 3-4 years or so, when were both out of school and working.

They are elegant and have a nice movement, but it is not one that is naturally good for collection. Andalusians are almost the polar opposite; built for collection and not designed to pull a cart at all. Frisians are lovely to look at and seem to have nice temperaments, this is true.

They are elegant and have a nice movement, but it is not one that is naturally good for collection. Andalusians are almost the polar opposite; built for collection and not designed to pull a cart at all. Frisians are lovely to look at and seem to have nice temperaments, this is true.

Even though they are often classified as a light draft, Frisians were/are a riding horse. Even had light breed introduced to lighten the Frisian way back when.

(Even the Lipizzaner started being bred for carriage horses at one point, so shall we say they're a draft meet for pulling?) Records show them as a very popular ridden horse hundreds of years ago by mounted knights.

But a history lesson is beyond the scope of this thread :lol:. Nature did not design the horse to carry loads on its back.

But again, beyond the scope of this thread :lol:I'll go with the Frisian, because they are calm. He has loved them forever and a long time ago before they were so popular we talked about importing a couple, even had contacts and did some legwork. Thing is Frisians wouldn't do well out here.

Though they are strong, gentle, and oh so lovely if they aren't over bred and long-faced, one wouldn't and shouldn't be expected to travel 8 to 10 hours climbing our steep mountains. I agree its lbs not miles, they were riding horses.

I personally think they are being over bred, lacking the traditional elegance and finesse in an effort to saturate the breed. Especially the flashy dappled gray ones... with the three-foot-long mane and crest neck... add on the Arabicize head.

The only Frisians I've experienced have been stubborn and shirty. I got the privilege of visiting a private Andalusian breeding barn. 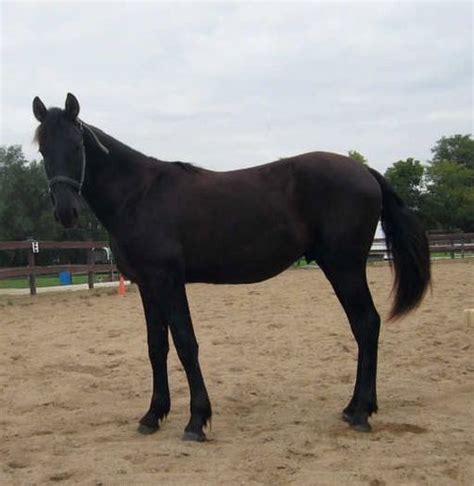 LOVED seeing those fillies and colts and watching the Indies being worked. I'm definitely going with Andalusian. I like Andalusian's, especially when they're dappled gray, but well groomed Fries ans make my heart stop.

Though they are strong, gentle, and oh so lovely if they aren't over bred and long-faced, one wouldn't and shouldn't be expected to travel 8 to 10 hours climbing our steep mountains. I personally think they are being over bred, lacking the traditional elegance and finesse in an effort to saturate the breed.

I was concerned about that very thing......their ability to hold up to my distance riding too, (and still wouldn't want to test it on a full blood Frisian) but a woman did a Mojave endurance ride (over 100 miles....3 day race I think) on a Frisian cross so that was good enough for me. My filly is a younger half sister of the gelding that did the Mojave race.

She'll take after her sire and 1/2 brother by being over 17 HD and not having the classical baroque look. My mare (also a cross-breed) has more of the baroque look that her sire has.

The mare is the easiest horse I've ever worked with in the past 40 years of riding. She thought otherwise and jumped the dividing fence after about 30 min, so she could join us on the other side. 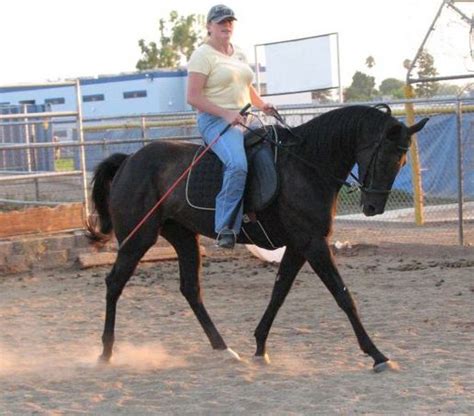 A higher fence has apparently worked at preventing a repeat. Found out afterwards that people do compete in Jumping and Cross-country with these Frisian Sport horses.

A lesson learned for me to not think that the Frisian in them will keep the Saddle bred in them from jumping. The feathering is lovely, but requires some extra checking to prevent scratches. The tail dragging the ground looks nice, but I end up cutting it just short of the ground because they've stepped on it and pull out hair (the tail and feathering also collect every burr within 100 yards, even if we don't get near it).

Of course watching them trotting and running across the pasture after I've finished grooming them with their long mane and tail flowing behind them and my mare's feathering looking full does make me forget about the extra work they sometimes require after a ride (or being taken for a walk in the case of my filly). In my youth I enjoyed a hot horse at times.

They had to be ridden by a rider who was willing to “extract” the real effort from them, and one mare would bolt blindly without using her brain to think about where she was going at all. Being on one of them is like being on a vibrating mass of pure malleable energy that can be channeled in any direction.

Not all people want a car with that much raw power and performance, so sensitive to the slightest movement... but for those who do, these horses are simply incredible. I can only wish I was forced to choose between these two breeds :lol: But I would go with Andalusian hands down.

I knew one, and he was the sweetest thing ever and so much fun and just awesome. Honestly my wife wants a Frisian, but I'm trying to steer her towards a gypsy manner instead... Me personally If I had the money I would like a Lipizzaner over an Andalusian though, but then again probably not for another 15 years before I have the much money to throw around.lol.

My Frisian/Saddle bred mare seldom spooks and those rare times when she does it's very short (e.g. jumps a step or two and stops to see what it was. First time walking along the road she'd just stop and watch any truck, bus or motorcycle that came roaring by.

Head up and ears forward, but no crazy of sudden moves. My coach previously had Andy's, she was married on one of them and did a lot of the Andalusian showing scene.

We've got one out competing around here at the moment in dressage, and he is a lovely stallion, but very much a cart horse. There's one interstate competing at FEI, I believe he's recently had a few Grand Prix starts.

He does quite well, but again, doesn't score like the warm bloods do with their naturally swinging backs. My friend just bought a rising 2-year-old Frisian, he is growing up in the paddock with my yearling.

He's a lovely boy, very quiet and docile, but doesn't seem like the sharpest tool in the shed. I like a horse to ask questions and have a bit of spunk to them, this boy just takes it as it comes and sleeps all the time.

Lyric is a Georgian Grande, by a Frisian stallion and out of a Saddle bred mare. She's big and solid, has an amazing mane & tail and feathering, but has a lot of Saddle bred traits, collects like a dream, moves amazing.