In their native country they have few diseases; Icelandic law prevents horses from being imported into the country and exported animals are not allowed to return. The only breed of horse in Iceland, they are also popular internationally, and sizable populations exist in Europe and North America. 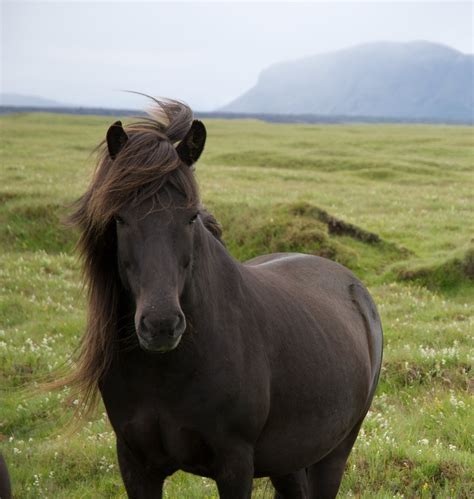 The breed is still used for traditional shepherding work in its native country, as well as for leisure, showing, and racing. Developed from ponies taken to Iceland by Norse settlers in the 9th and 10th centuries, the breed is mentioned in literature and historical records throughout Icelandic history; the first reference to a named horse appears in the 12th century.

Horses were venerated in Norse mythology, a custom brought to Iceland by the country's earliest settlers. Natural selection has also played a role, as the harsh Icelandic climate eliminated many horses through cold and starvation.

In the 1780s, much of the breed was wiped out in the aftermath of a volcanic eruption at Lake. The first breed society for the Icelandic horse was created in Iceland in 1904, and today the breed is represented by organizations in 19 different nations, organized under a parent association, the International Federation of Icelandic Horse Associations.

Icelandic horses weigh between 330 and 380 kilograms (730 and 840 lb) and stand an average of 13 and 14 hands (52 and 56 inches, 132 and 142 cm) high, which is often considered pony size, but breeders and breed registries always refer to Icelandic's as horses. Several theories have been put forward as to why Icelandic's are always called horses, among them the breed's spirited temperament and large personality.

Another theory suggests that the breed's weight, bone structure and weight-carrying abilities mean it can be classified as a horse, rather than a pony. The breed comes in many coat colors, including chestnut, dun, bay, black, gray, palomino, pinto and roan.

An Icelandic horse with a heavy winter coatCharacteristics differ between various groups of Icelandic horses, depending on the focus of individual breeders. Some focus on animals for pack and draft work, which are conformationally distinct from those bred for work under saddle, which are carefully selected for their ability to perform the traditional Icelandic gaits.

Members of the breed are not usually ridden until they are four years old, and structural development is not complete until age seven. Their most productive years are between eight and eighteen, although they retain their strength and stamina into their twenties.

An Icelandic mare that lived in Denmark reached a record age of 56, while another horse, living in Great Britain, reached the age of 42. The horses tend to not be easily spooked, probably the result of not having any natural predators in their native Iceland.

Icelandic's tend to be friendly, docile and easy to handle, although also enthusiastic and self-assured. As a result of their isolation from other horses, disease in the breed within Iceland is mostly unknown, except for some kinds of internal parasites.

The low prevalence of disease in Iceland is maintained by laws preventing horses exported from the country being returned, and by requiring that all equine equipment taken into the country be either new and unused or fully disinfected. As a result, native horses have no acquired immunity to disease; an outbreak on the island would be likely to be devastating to the breed.

This presents problems with showing native Icelandic horses against others of the breed from outside the country, as no livestock of any species can be imported into Iceland, and once horses leave the country they are not allowed to return. The Icelandic is a five-gaited breed, known for its sure-footedness and ability to cross rough terrain.

Although most horse experts consider the canter and gallop to be separate gaits, on the basis of a small variation in the footfall pattern, Icelandic breed registries consider the canter and gallop one gait, hence the term “five-gaited”. There is considerable variation in style within the gait, and thus the told is variously compared to similar lateral gaits such as the rack of the Saddle bred, the largo of the Pass Fine, or the running walk of the Tennessee Walking Horse.

Like all lateral ambling gaits, the footfall pattern is the same as the walk (left hind, left front, right hind, right front), but differs from the walk in that it can be performed at a range of speeds, from the speed of a typical fast walk up to the speed of a normal canter. Some Icelandic horses prefer to told, while others prefer to trot; correct training can improve weak gaits, but the told is a natural gait present from birth.

It is used in pacing races, and is fast and smooth, with some horses able to reach up to 30 miles per hour (48 km/h). Not all Icelandic horses can perform this gait; animals that perform both the told and the flying pace in addition to the traditional gaits are considered the best of the breed. 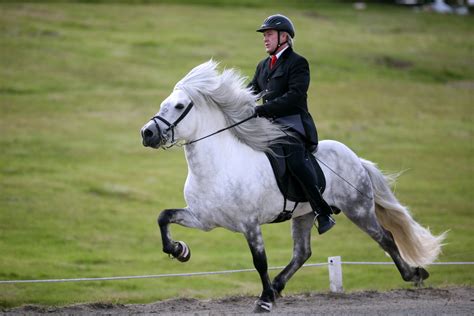 The flying pace is a two-beat lateral gait with a moment of suspension between footfalls; each side has both feet land almost simultaneously (left hind and left front, suspension, right hind and right front). It is meant to be performed by well-trained and balanced horses with skilled riders.

A slow pace is uncomfortable for the rider and is not encouraged when training the horse to perform the gait. These later settlers arrived with the ancestors of what would elsewhere become Shetland, Highland, and Connemara ponies, which were crossed with the previously imported animals.

There may also have been a connection with the Yakut pony, and the breed has physical similarities to the Nordlandshest of Norway. Other breeds with similar characteristics include the Fare pony of the Faeroe Islands and the Norwegian Fjord horse.

Mongolian horses are believed to have been originally imported from Russia by Swedish traders; this imported Mongol stock subsequently contributed to the Fjord, Ex moor, Scottish Highland, Shetland and Connemara breeds, all of which have been found to be genetically linked to the Icelandic horse. About 900 years ago, attempts were made to introduce eastern blood into the Icelandic, resulting in a degeneration of the stock.

The breed has now been bred pure in Iceland for more than 1,000 years. The earliest Norse people venerated the horse as a symbol of fertility, and white horses were slaughtered at sacrificial feasts and ceremonies.

When these settlers arrived in Iceland, they brought their beliefs, and their horses, with them. Horses played a significant part in Norse mythology, and several horses played major roles in the Norse myths, among them the eight-footed pacer named Leaner, owned by Odin, chief of the Norse gods.

Small, a mare who is the first Icelandic horse known by name, appeared in the Book of Settlements from the 12th century. According to the book, a chieftain named Seal-Thorir founded a settlement at the place where Small stopped and lay down with her pack.

This early literature has an influence today, with many riding clubs and horse herds in modern Iceland still bearing the names of horses from Norse mythology. Horses were often considered the most prized possession of a medieval Icelander.

Indispensable to warriors, war horses were sometimes buried alongside their fallen riders, and stories were told of their deeds. Icelanders also arranged for bloody fights between stallions ; these were used for entertainment and to pick the best animals for breeding, and they were described in both literature and official records from the Commonwealth period of 930 to 1262 AD.

Stallion fights were an important part of Icelandic culture, and brawls, both physical and verbal, among the spectators were common. The conflicts at the horse fights gave rivals a chance to improve their political and social standing at the expense of their enemies and had wide social and political repercussions, sometimes leading to the restructuring of political alliances. 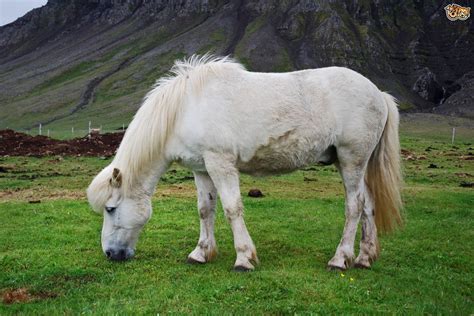 However, not all human fights were serious, and the events provided a stage for friends and even enemies to battle without the possibility of major consequences. Courting between young men and women was also common at horse fights.

An Icelandic mare and foal Natural selection played a major role in the development of the breed, as large numbers of horses died from lack of food and exposure to the elements. Between 874 and 1300 AD, during the more favorable climatic conditions of the medieval warm period, Icelandic breeders selectively bred horses according to special rules of color and conformation.

From 1300 to 1900, selective breeding became less of a priority; the climate was often severe and many horses and people died. Between 1783 and 1784, around 70% of the horses in Iceland were killed by volcanic ash poisoning and starvation after the 1783 eruption of Lakagígar.

The eruption lasted eight months, covered hundreds of square miles of land with lava, and rerouted or dried up several rivers. The population slowly recovered during the next hundred years, and from the beginning of the 20th century selective breeding again became important.

Icelandic's were exported to Great Britain before the 20th century to work as pit ponies in the coal mines, because of their strength and small size. However, those horses were never registered and little evidence of their existence remains.

The first formal exports of Icelandic horses were to Germany in the 1940s. Great Britain's first official imports were in 1956, when a Scottish farmer, Stuart McIntosh, began a breeding program.

Since 1969, multiple societies have worked together to preserve, improve and market these horses under the auspices of the International Federation of Icelandic Horse Associations. The Icelandic is especially popular in Western Europe, Scandinavia, and North America.

Almost 50,000 are in Germany, which has many active riding clubs and breed societies. Icelandic horses still play a large part in Icelandic life, despite increasing mechanization and road improvements that diminish the necessity for the breed's use.

Both gallop and pace races are held, as well as performance classes showcasing the breed's unique gaits. Winter events are often held, including races on frozen bodies of water.

In 2009 such an event resulted in both horses and riders falling into the water and needing to be rescued. The first shows, focused on the quality of animals as breeding stock, were held in 1906. 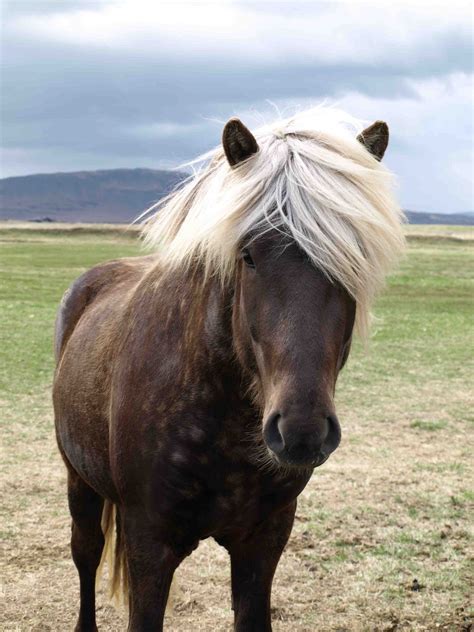 The Agricultural Society of Iceland, along with the National Association of Riding Clubs, now organizes regular shows with a wide variety of classes. Some horses are still bred for slaughter, and much of the meat is exported to Japan.

The Leif was founded on May 25, 1969, with six countries as original members: Austria, Denmark, Germany, Iceland, the Netherlands, and Switzerland. Later, Finland, Canada, Great Britain, USA, Fare Islands, Luxembourg, Italy, Slovenia and Ireland became members, but Ireland subsequently left because of a lack of members.

New Zealand has been given the status of “associate member” as its membership base is small. In 2000, WorldFengur was established as the official Leif registry for Icelandic horses.

The registry is a web database program that is used as a studbook to track the history and bloodlines of the Icelandic breed. The registry contains information on the pedigree, breeder, owner, offspring, photo, breeding evaluations and assessments, and unique identification of each horse registered. 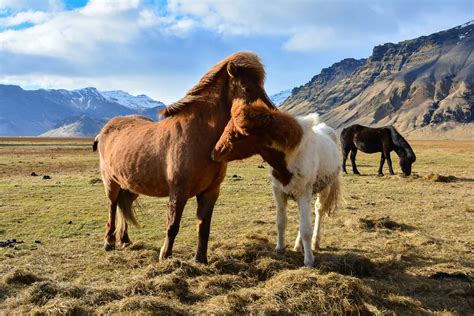 The database was established by the Icelandic government in cooperation with the Leif. Since its inception, around 300,000 Icelandic horses, living and dead, have been registered worldwide.

The Islandpferde-Reiter- UND Züchterverband is an organization of German riders and breeders of Icelandic horses and the association of all Icelandic horse clubs in Germany. United States Icelandic Horse Congress.

Ponies and riders fall through ice during racing in Reykjavík”. International Federation of Icelandic Horse Associations.

^ a b “WorldFengur: The Studbook of Origin for the Icelandic Horse”. Wikimedia Commons has media related to Icelandic horse. 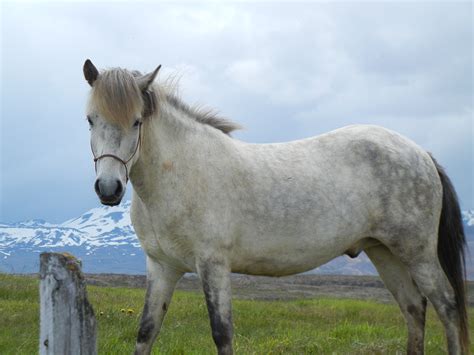