Are There Ponies On Chincoteague Island

Two herds of wild horses make their home on Assateague Island, separated by a fence at the Maryland-Virginia line. Each year the Chincoteague Volunteer Fire Company purchases a grazing permit from the National Fish & Wildlife Service. 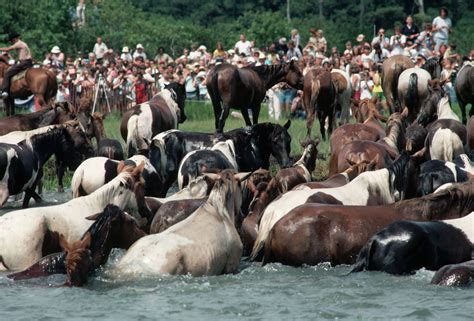 This permit allows the Fire Company to maintain a herd of approximately 150 adult ponies on Assateague Island. The Fire Company controls the herd size with a pony auction on the last Thursday in July.

Each year tens of thousands of spectators come to watch the Saltwater Cowboys swim the pony herd from Assateague Island to ChincoteagueIsland. These small but sturdy, shaggy horses have adapted to their environment over the years by eating dune and marsh grasses and drinking fresh water from ponds.

Some have suggested that the wild ponies of Assateague trace their origin to horses released to forage on the Island by early settlers. However, the evidence strongly suggests that they are the descendants of the survivors of a Spanish galleon which wrecked off the coast of Assateague.

Penning began as a way for livestock owners to claim, brand, break and harness their loose herds. Penning on ChincoteagueIsland is not mentioned until the mid-1800's, and it believed to have been begun by two islanders who owned large herds that grazed on Chincoteague.

In 1925 the town authorized the Chincoteague Volunteer Fire Company to hold a carnival during Pony Penning to raise funds. Bolstered by the interest in the pony swim, visitors began arriving from across the country for the annual penning. 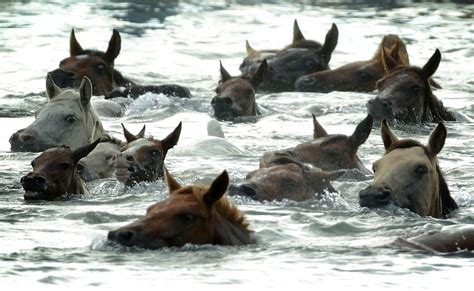 The increased revenue from the carnivals and auctions enabled the fire company to modernize its equipment and facilities, and in 1947 it began to build its own herd by purchasing ponies from local owners. That same year, 1947, Marguerite Henry published Misty of Chincoteague, the story that made Pony Penning internationally famous.

The tale of the wild pony Phantom, her foal Misty and the children who buy and raise her has become a classic, still loved and enjoyed by each new generation. “Salt Water Cowboys” herd the horses across the narrowest part of Assateague Channel at low tide, after which they are examined by veterinarians.

After a resting period, they are herded through town to a corral at the Carnival Grounds where they stay until the next day's auction. The Pony Auction not only provides a source of revenue for the fire company, but it also serves to trim the herd's numbers.

Each year thousands of people flock to ChincoteagueIsland to watch the Pony Penning and enjoy the Firemen's Carnival. For many of them, the trek to the shores of Assateague Channel on the last Wednesday and Thursday of July has become an annual event, an opportunity to participate in a tradition older than the country itself. 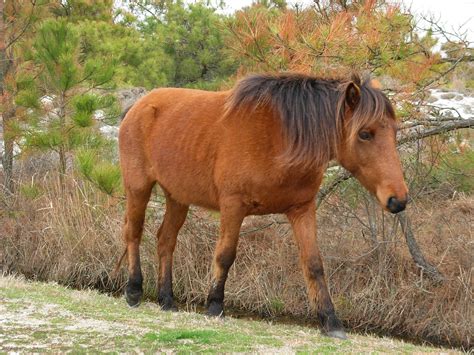 The dominate stallion will kick his male offspring out of the band after a couple of years, once the colt has reached sexual maturity. Young bachelor males tend to form their own small band, until they become big and strong enough to begin fighting for and winning mares from other stallions.

A buyback pony is auctioned with the stipulation that it will be donated back to the Fire Company and returned to Assateague Island to replenish the herd. A theory with more historical evidence, is that the ChincoteaguePonies are descendants of colonial horses brought to Assateague Island in the l7th century by Eastern Shore planters when crop damage caused by free roaming animals led colonial legislatures to enact laws requiring fencing and taxes on livestock.

Prior to the refuge's establishment in 1943, the Chincoteague Volunteer Fire Company purchased the ponies and continues ownership to this day. The Firemen are allowed to graze up to 150 ponies on refuge land through a Special Use Permit from the United States Fish and Wildlife Service.

The Virginia herd is owned by the Chincoteague Volunteer Fire Company and is grazed in two designated compartments on the refuge. Following tradition, the Fire Company rounds up the entire herd for the Annual Pony Penning and Auction held on the last Wednesday and Thursday of July. 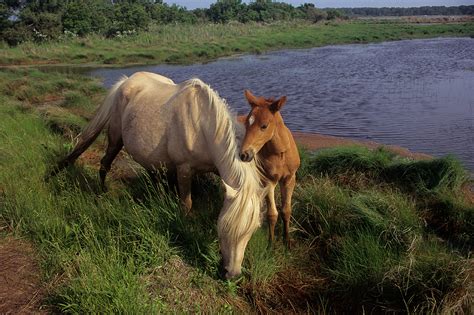 Tens of thousands of spectators from around the world gather on ChincoteagueIsland each year to watch this annual tradition. The Chincoteague Fireman's Carnival (with rides, games, raffles, and lots of good food) will be open each night (Mon – Sat) during pony penning week beginning at 7pm.

Misty of Chincoteague will be showing, at 11:00 am daily, at the Island Theater during pony penning week (Mon – Fri). The weekend prior to Wednesday's Pony Swim, “Saltwater Cowboys” on horseback will begin to round up the approximately 150 adult wild ponies that live on Assateague Island, along with the 60 to 70 foals that were born in the spring.

About 50 adult ponies and their foals live on the southern end of Assateague Island. The Southern Corral is located on Assateague, just off the road that leads to the beach, and is accessible to the public.

The public can view the Ponies in the Southern Corral all day Sunday, Monday, and Tuesday. About 100 adult ponies and their foals reside a little further north on the Assateague Island, and will be herded into the Northern Corral, Sunday morning beginning at about 7:30 am. 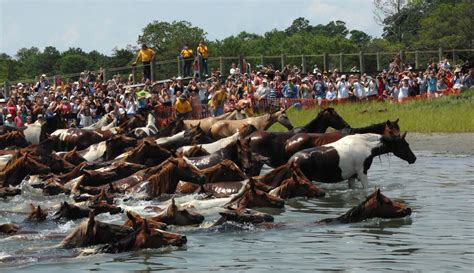 Bring snacks, water, bug spray and cameras to enjoy this special event. Bicyclists and hikers can use Swan Cove Trail to access the beach.

All the Ponies will be checked by a vet and can be viewed by the public in the Southern Corral on Assateague. On Wednesday, the Saltwater Cowboys will swim the ponies from Assateague Island to ChincoteagueIsland.

The Ponies will swim across the Assateague Channel and come ashore on the east side of ChincoteagueIsland. A large screen will be located in Veterans Memorial Park with a live feed of the swim.

The Town of Chincoteague provides a free Pony Swim Shuttle service, beginning at 4:00 am. The Pony Shuttle runs between various locations on ChincoteagueIsland and Veterans Memorial Park.

All visitors coming in just for the day are encouraged to go to Chincoteague Municipal Center (6155 Community Dr, ChincoteagueIsland, VA 23336) and catch the free Pony Shuttle. Note that Veterans Memorial Park is not where the Ponies come ashore. 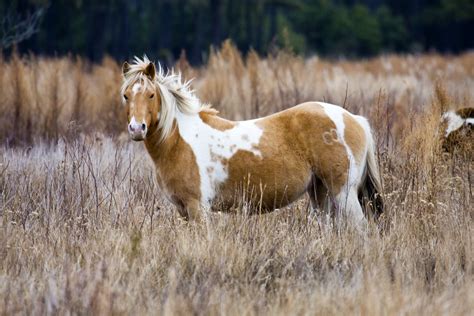 Tickets are sold each night at the carnival and amongst the crowd while waiting for the swim to occur. Then the Saltwater Cowboys will “parade” the ponies down Main Street, to the carnival grounds where the auction will be held Thursday morning.

First, the auction helps to control the overall size of the herd, keeping it from growing too large. The Fire Company uses some proceeds from the auction to provide veterinary care for the ponies throughout the year. 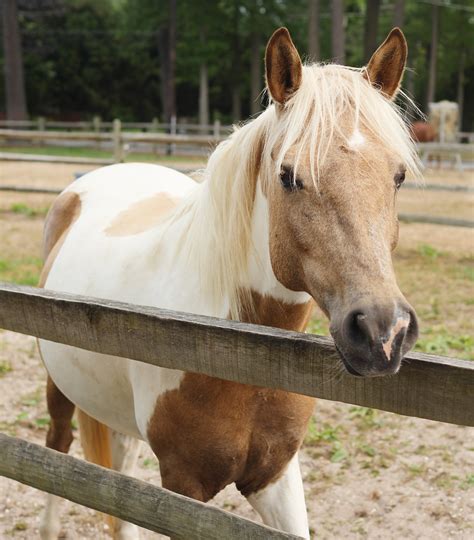 On Friday, the adult ponies will make the return swim to Assateague Island where they will live in the wild for another year. Rides, games, food, live music, BINGO and raffles.

The northern end of Assateague Island VA is home to the largest population of ponies and their foals, about 100 to 150 total. Special bus tours are normally offered on the Refuge Trek to visit the corral after the roundup.

There is no charge by the Chincoteague Volunteer Fire Company for parking or seeing the ponies swim. All those seeking handicap parking and all day-trippers are encouraged to go to the Municipal Center (6150 Community Drive, ChincoteagueIsland, VA 23336) and catch the free shuttle.

Shuttles begin at 6am and end one hour after the ponies arrive at the Carnival grounds. The first foal to come ashore will be named King or Queen Neptune and will be given away in a raffle drawing at the carnival grounds bandstand at 7pm.

Tickets are sold each night at the carnival and during the wait time for the swim. After swimming the short distance across the channel, the ponies will rest for approximately 45 minutes to an hour before “parading” to the carnival grounds on Main Street. 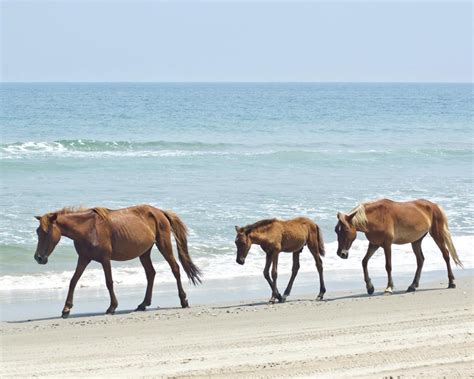