We are also interested to share guest articles for Hearthstone, simply contact us! We’re also waiting for the third Hero Power and the last three Signature Treasures to become available later in Dark moon Free (possibly at the same time as mini-set). 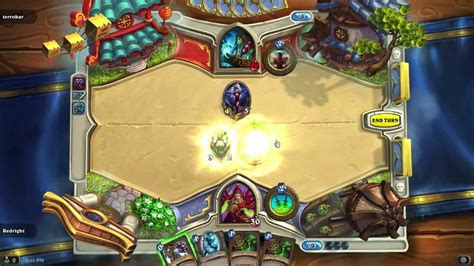 1 Animated Broomstick 1 1 Tour Guide 1 2 Haunted Creeper 1 2 Serbian Egg 1 5 Teachers’s Pet 1 The best thing about it is that even if you just drop them on curve, your opponent will be forced to deal with them, so you don’t reap a lot of tempo & value from your HP.

Mage is probably the only class in which all the Hero Powers & Signature Treasures are seeing some play (in the first build, you can also use Wand of Dueling, and it will work just as fine), so if you like diversity, Mozart might be your best bet. Just dropping Confection Cyclone into 2x Sugar Elemental makes your Grand Finale summon four 8/8’s, something that most of the decks will have trouble dealing with.

Yes, this version is now better than it was, but a single MANA discount to Signature Treasure it not enough to bring one of the worst classes into the “meta”. Drocomurchanicas (the buffed Signature Treasure) builds promote going for “Menagerie” style of decks, preferably with N'Both, God of the Deep.

Healing from Hero Power comes handy against more aggressive opponents, but the biggest downside is limited AOE board clears. While you can do some work with Wild Romancer & Holy Nova, you have no way to deal with bigger boards of 3+ health minions (other than stalling with Wave of Apathy). 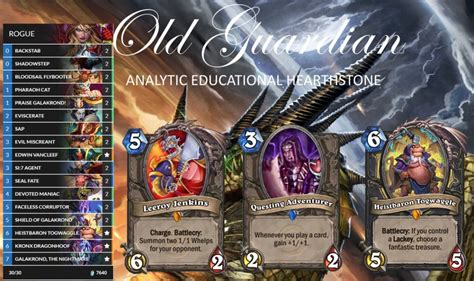 It’s also worth noting that Droplet of Insanity Signature Treasure can be replaced with Fractured Spirits if you don’t have the former unlocked. I think that Droplet is better, especially during the first games, when you don’t run bigger minions yourself (and some classes like Demon Hunter have nothing worth silencing + copying).

With Connections out of question, players have decided to go back to the weapon-focused build once again with Roguish Maneuvers + Deadly Weapons 101 combo once again. As health pools grow, it’s much harder to just kill them with weapon alone, but it’s still a massive chunk of damage that your opponent might have a hard time dealing with (again, weapon destruction is uncommon, so Taunting up is the best thing they can do most of the time, and you should find some ways to deal with those too).

0 Lightning Bloom 1 1 Devolving Missiles 1 1 Tour Guide 1 2 Trick Totem 1 2 Wanamaker 1 It doesn’t mean that the class can’t win, but you really need some Hero Power high rolls to make up for the fact that you no longer get two minions with each use.

Removing some early game minions while also gaining a bunch of Armor is not a bad thing at all. With Much, Pirate, Dragon AND Amalgam in the deck, it’s already good enough in the basic version, plus you will most likely get some other minions types later down the road.

You should be able to deal some weapon damage by the time you get to late game, so Grammar is usually enough to kill your opponent around T9-T10. Sadly it’s quite slow, so it will work only in certain matchups, but if you stick it to the board, most of the starter decks don’t run a good way to deal with it.

Duels is Hearthstone’s new game mode, finally bringing the dream of PVP Dungeon Runs to life. It may seem daunting at first, but with this list of class strategies and starting decks, you’ll be a top tier duelist in no time.

You can stick with Roguish Maneuvers and Deadly Weapons 101, or you can go for an endless array of Combo triggers and cheap board presence with Connections and Serbian Peddler. The latter has much more staying power and has a better chance for a deep run, but the former might be easier to start with if you’re new to the format, especially because it is cheaper to build.

The Newman dagger (which becomes a 2/2 with Combo) is a brutally consistent and efficient tool, reminiscent of the ‘Even’ decks from the past. Now the class always has access to a dagger with minimal MANA investment, allowing for more consistent strategies revolving around weapon buffs.

The fact that Self-Sharpening Sword is outright banned in the initial deck building phase should be a strong hint that you should pick it at every opportunity later on. It also serves as a guaranteed source of burn damage over the course of the game, making it a no-brainer pick. 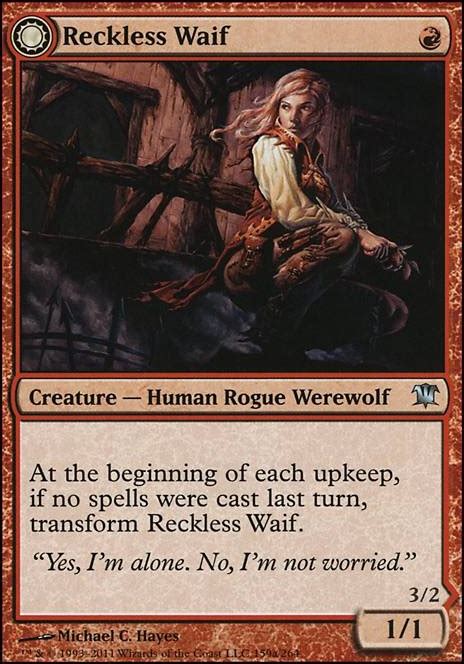 Since you can still do Rogue shenanigans, anything with MANA cost reduction also benefits you greatly, including Crystal Gem for early combo weapon setups. They got brutalized by a nerf, but are now primed for a comeback thanks to their strong Whispers of the Old Gods class cards.

Evolve can be an instant knockout punch on a wide board, while Flame wreath Faceless coupled with Lightning Bloom is a nightmarish early play. The Best passive treasure:Recycling used to be a sleeper OP pick because it shuts down any burn-based strategies, and is a strong contender once again.

The Best passive treasure: From the Swamp has incredible synergy with your starting hero power, making it a nightmare for token-based aggressive opponents to contest your board. Unlocked Potential is a sleeper thanks to its synergies with cards as varied as Armor smith and Grammar Hell scream, but Warrior can utilize most of the common treasures with the right build.

If you’re looking for more time to execute your game plan, Rocket Backpacks synergizes well with Athletic Studies and Recycling can also serve as a nifty tool to help you get to the point where you can wait no longer. With Rogues becoming so effective at mowing you down in a few turns, they rendered aggressive Demon Hunter strategies redundant (at least until the launch of Madness at the Dark moon Free).

A build like this can even outpace weapon-based Rogue decks when it comes to burst, and your goal is to make sure that you can disrupt your opponent’s plans long enough with cards like MANA Burn and Consume Magic to deliver the killing blow. The Best passive treasure: Pillage the Fallen offers free weapons to fragment enemy faces with and is therefore the best of the bunch.

Infinite Arcane’s MANA discount only comes into play in long matches, but quickly loses relevance in the ultra-late game. The Best passive treasure: Double Time is incredible, but Robe of the Apprentice and Robin’s Crying Orb (and their upgraded versions) are also straightforward picks.

Getting bigger Silver Hand Recruits somewhere beyond turn six isn't much help in a format built around crazy combos, while Warriors are infinitely better at pulling off Menagerie strategies. It may seem a good idea to go for maximum greed with the Paladin’s hero power, playing premium minions, so you can reliably resurrect them, but the meta is too fast for that approach.

The Best passive treasure: The new Sandy Surprise guarantees that your buff targets stick on the board, making it safer to play out even against ping classes. Rocket Backpacks augment your buff strategies well, especially if you pick up Light forged Blessing for big comeback plays.

Missing these, you can lean further into the tempo approach of the starting deck, keeping an eye out for Wax Roger as it can be an installing play in the early turns. Warlocks’ Discard synergies received a bunch of serious buffs, but it’s the cheap Demon package from Madness at the Dark moon Free that made them so competitive.

Man’ARI Mother and Fire Breather add some much-needed stabilization tools to the archetype, which now has a monstrous payoff in the form of Pillbox, the Banished One. Then they can discard to their hearts’ content without risking an automatic loss to fatigue in slower matchups.

This doesn’t necessarily make for a reliable strategy deep into your run, while your treasures will have to bail you out when it comes to MANA cheating or resource generation. Not much has changed in that sense with the launch of the new expansion, as a control build still remains the best strategy for the class.

However, Droplet of Insanity is a much better option for your starting treasure, allowing you to generate additional card advantage in the longer battles. The Best passive treasure: Cheaper spells with Robin’s Crying Orb should be your main priority from pool one.

Follow this with Battle Totem in pool two, which can be incredible in the right Priest build, offering near-endless card-generation guaranteeing wins so long as you can keep yourself alive. The Best passive treasure: Robe of the Apprentice and Robin’s Crying Orb are the best ones to start with, and with some luck, you can find Double Time from pool 2 to get the strongest possible Druid run.

Though your class and deck will have a large impact on the correct choice, some of them are a cut above the others and should always warrant consideration. Hyperblaster is a brutally effective removal tool for every class that doesn’t rely on weapons to deal face damage.

Surly Mob, Wand of Disintegration and Staff of Scales fulfill a similar role. Wax Roger (and to a lesser extent, Grimmer Patron) can installing you the game if you rely on early wide boards. 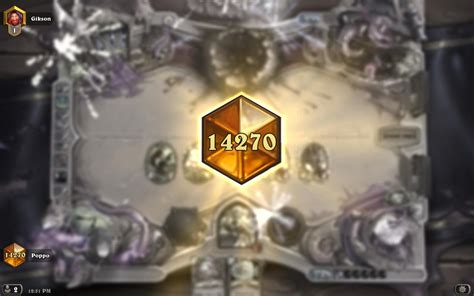